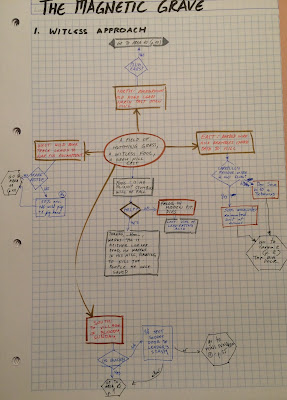 +Patrick Stuart drew a spatial representation of a room being described. He asked if we thought it was insane. I said I thought so (although, to be clear, I'm a big fan of Patrick Stuart and like his insane very much).

Anyway, I suggested using a flowchart to depict a room and +cole long and +Jacob Hurst wanted to see what it would look like.

So I made a flowchart for a single room (well, clearing in the woods).

... aaaaand I'm not sold on it. It could work, but I think it would still take a LOT of layout work and still likely be slower to read for a DM using this in a product than a note-form approach. Something like the Hackslashmaster approach or the Papers&Pencils approach.