All PCs are Thieves

Over the past five months I've drawn over 144 wizards, thieves and fighters. Characters, vignettes and accompanying texts. A number I've also published here. 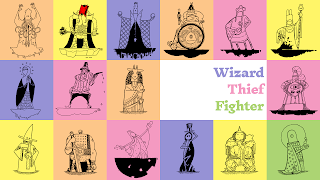 The Wizards were easy. They're madmen, plumbing the depths of creation, seeking knowledge humanity was not meant to know, bringing magic, science and weirdness into the fantasy rpg. A wizard as an opponent in a game of D&D is the perfect opponent. It takes so little to make them wrong. The corruption of magic can make dispatching a wizard, even one who is good at heart, an act of mercy. No hero needs feel bad about dispatching a wizard.

The Fighters were also easy. They represent power, hierarchy, strength, domination. A wizard breaks the rules of reality to get to the top, a fighter is the top. Two heroes walk into a ring, one comes out. That is the fighter. A fighter represents the Man and it is so easy for the power of the fighter to corrupt. After all, there can be only one.

But Thieves. Making thief-type opponents is hard, because by their nature they are not the opponents of PCs. They are not kshatriyas or brahmins, they are not in positions of power, they do not seek to spit in the eyes of gods and demons with their magics. They are the underdogs. Ordinary folks getting by on guts and guile.

Thieves are essentially all adventurers. At best, they are competitors, but not opponents.

Prometheus. Anansi. Loki. Robin Hood. Reynard the Fox. Bilbo. Aladdin. Sinbad. Odysseus. Theseus. Conan. Brier Rabbit. Coyote. Bart Simpson. The Doctor. Bugs Bunny. Benjamin. All of them are "Thieves" and "Upstarts" against the order. Against the Man. Sneaking into the Scary Wizard's Temple to steal a ruby. Overthrowing a tyrant king. Going against the giants. Assassinating a hobgoblin holy man to prevent the downtrodden goblinoid masses rising up against the rightful elven aristocracy.

The only thieves are the ones who overthrow the tyrant and then put themselves in his place, becoming the Man, the Wizard, the Priest.

At the core of the D&D adventure is a group of down-on-their-lucks making it in the big world. Rising up, against all odds. To do this they use guile, trickery, guts and if they don't die, they achieve glory. In essence, it doesn't matter if a 1st level character is a barbarian or a bard or a warlord (terrible class name, by the way), they're all thieves.

And that's why setting thieves as opponents is kind of crappy. They're thieves because they're the underdogs and have to fight a sneaky battle against those in power. And that's why following Elminster the All-powerful's instructions is kind of lame, because it's just doing what the authority tells you.

The PCs are in a fantasy world where they can overturn everything at no cost. And now, they're going to follow orders from the Man to keep things the way they are. How boring!

Subvert the order! Bring down the Fighters and the Wizards that keep the common goblin down! 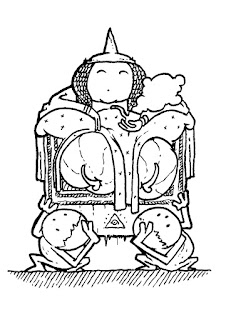 Glorious ruler gently rests, smoking the Pipe of Djinn on the Throne of Little Three-Eyed Thralls while contemplating the world through the colour haze of trans-plutonian existence.


Someone has stolen my Throne and now the Thralls won’t carry me!

Eugene the Djinn has a well-laid business proposition for a gin franchise. It will be a success.


Three Wizards Walk (and are Carried) About


... after becoming friends with the slothrog and releasing it. They wander into the Reaver Camp. After putting on a harmonica duel with one of the pirates, sharing some long pig, charming another pirate and singing an epic poem in praise of Fooloo, first mate, they are acclaimed as true friends. The pirates pay them for the entertainment and the charmed pirate, 'Chunky', joins as a henchman carrying The Pot.

They arrive at the Golden Barge and spot the skeletons on it. After denting the barge, a skeleton comes to fix it. With mending, they help fixing it. They engage the skeleton in conversation and soon prove that they too abhor "the flesh demons" and point to the pot, the mending and some illusion magics as proof. After demonstrating their "non-fleshiness" to some more skeletons they are allowed in.

The skeletons take them to see the "Great Machine Mind", while equipping them with some sentient snacks to deliver. At the foot of the great staircase they run into the great ape dropping barrels on them. After very little thought the Astrolomancer summons an arachnid demon from the great icy seas of chaos that is 'immune to all physical attacks'. It promptly breaks free of his control.

Making themselves scarce (crappy illusions, darkness, phantasmal barrier and some other stuff) the summoned demon goes after the ape. Bypassing the whole battle they enter the "Control Chamber" where they find the odd-headed supercilious and sniffy creature with a vibro axe trying to activate the "mind-machine-interface-helmet". Eventually they lure the demon inside and close the door behind them, while they rest.

Returning an hour later, the room is a mess, the demon has evaporated back into the seas of great icy chaos and they discover that they don't know the odd language to control the machine. Disappointed they proceed to poke around further in the barge, picking up some books, discovering great hamster wheels, and deciding to discover another of these "odd-heads" to use them to control the "great machine mind".

Then they politely leave, thanking the skeletons for their help. 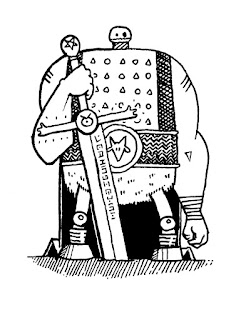 Great magus of the metal order, binder of demons, witch king of barbarians, poses with the great thrall Littlehead Metalknees.

Pull me from the stone! 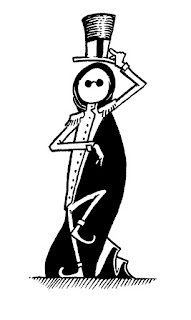 Hat trick wizard and summoner of rabbits of Arrgh, tips the Hat of Conjuration to you. With the Cape of Night and the Black Pince-Nez of Rainbows, how can you stand against his magnificent thinness?

Complaints in the Court of Confusions 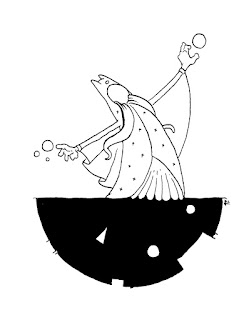 
Slayer of the Scumbag Sorcerer, Defeater of the Douche Demonist, the Evil Elementalist and the Wanker Wizard.


Who Will Rid Me of this Self-Absorbed Fairy Princess?


There is a filthy goblin in the basement playing checkers with a ghost in her head.
Posted by Luka at 04:47 No comments: